Mexican Street Corn (called “elote”) is usually on-the-cob, dripping-with-deliciousness stuff you find in all kinds of random places. I first had some at a friend’s house. It was straight off the grill, messy, and I was instantly hooked. I played with the idea of this recipe for a while, and decided that it’s easiest to eat when it’s served in a biggo bowl versus on-the-cob. This easy side dish needs just 5 ingredients and about 30 minutes of your time. It’s another make ahead marvel, too, so you can whip it up hours ahead of when you’re going to chow down.

Think of zesty, salty, slightly creamy corn with a Mexican flair, and you’ve got the idea. The real name for this kind of dish is ‘elote’, but for the sake of pronunciation, we’ll just call it Mexican Street Corn.

We used this seasoning from Trader Joe’s because it’s got a great blend of the flavors we wanted in our little dish. You can definitely skip this and just substitute some lime juice, chile powder, and salt.

Amazon actually has a deal on these two seasonings, and we use them both all the time! The Everything but the Bagel Seasoning is great on bagels (obviously), eggs, avocado toast, sandwiches, and tons of other goodies.

Now then, let’s make some Mexican Street Corn, shall we?

First, shuck your corn (shuck is a funny word, ‘m I right?). Wrap each ear of corn in some foil (no butter, olive oil, seasoning).

Place directly on a rack in the oven and roast at 400 for 30-35 minutes, until the kernels are cooked.

Let the corn cool so that you can handle it, then remove the kernels from the cob. I use a bundt pan to do this because it makes it way less messy and much easier to handle the corn. Just place the cooked corn cob vertically in the hole of the bundt pan and cut the kernels off straight into the well.

Crumble up some yummy cotija cheese. Cotija is available in pretty much every grocery store these days, and it has a long shelf life so you can keep it around for a while. You can usually find it with the other Mexican cheeses like queso asadero and queso fresco.

Then it’s all about mixin’ it up. Combine the corn, cotija, spices, cilantro, and mayo.

Give ‘er a good ole toss.

Serve alongside some extra cotija cheese and cilantro. The great thing about this recipe is you can make it ahead of time, cover it, and store it in the fridge. You can serve it hot, at room temperature, or cool. 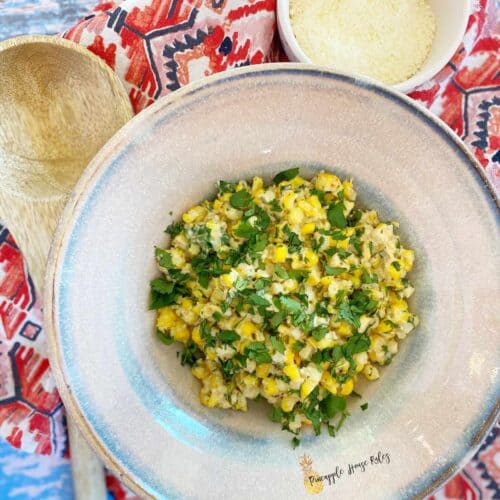