Guess who’s excited that the AAASSSTTTRRROOOOOSSS have made the playoffs? I swear this kid is their Fan Numero Uno. His adorable hat is too big for him, but it’s by far his favorite item of clothing. This little guy will sit down and watch the game along with than any other big-bellied fella around. 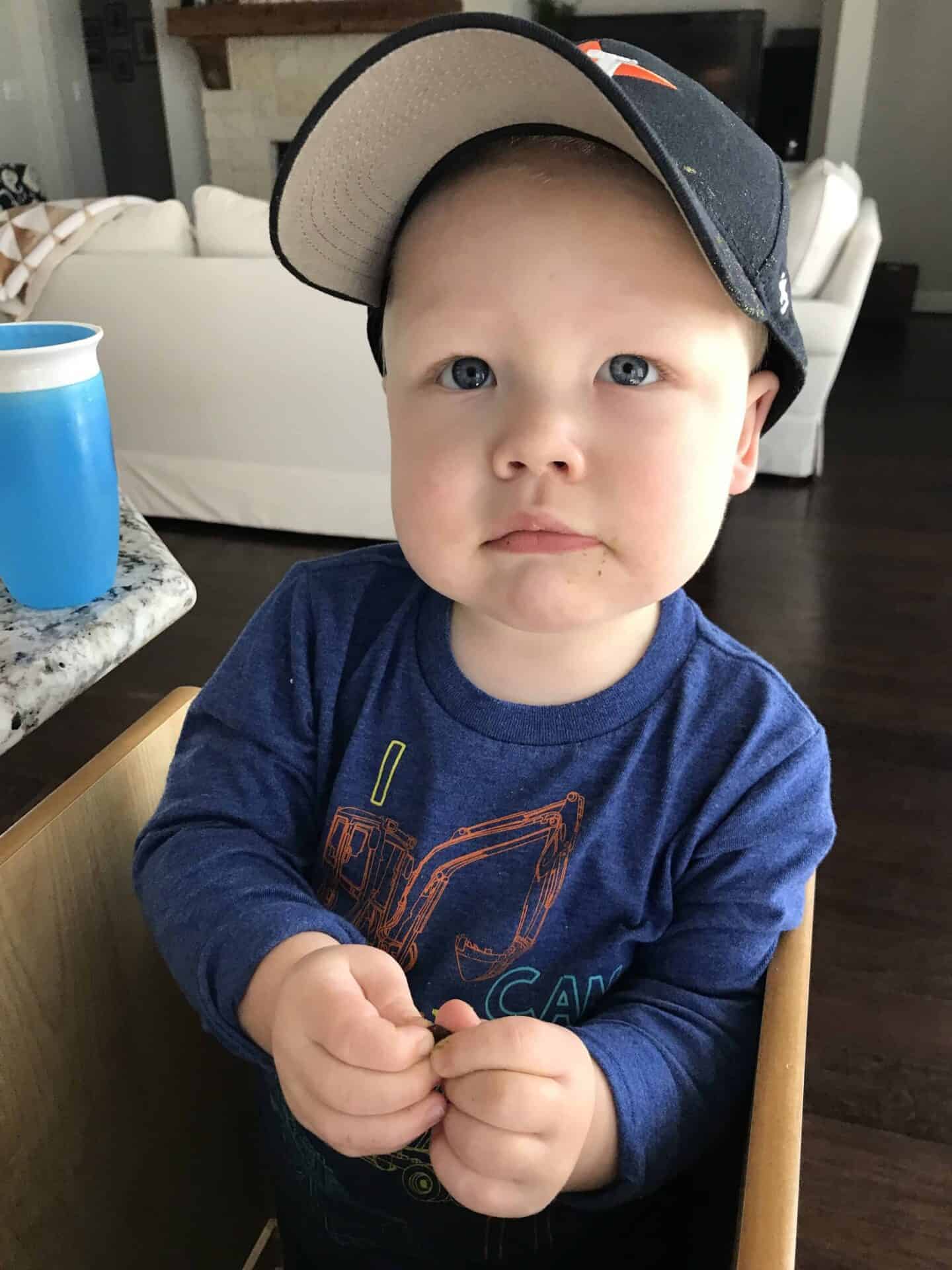 He’s actually got a really good arm, too. I’m secretly hoping he’ll be a pitcher one day, (By the way, did you know Pitcher was my maiden name?) It’s fitting, you know? 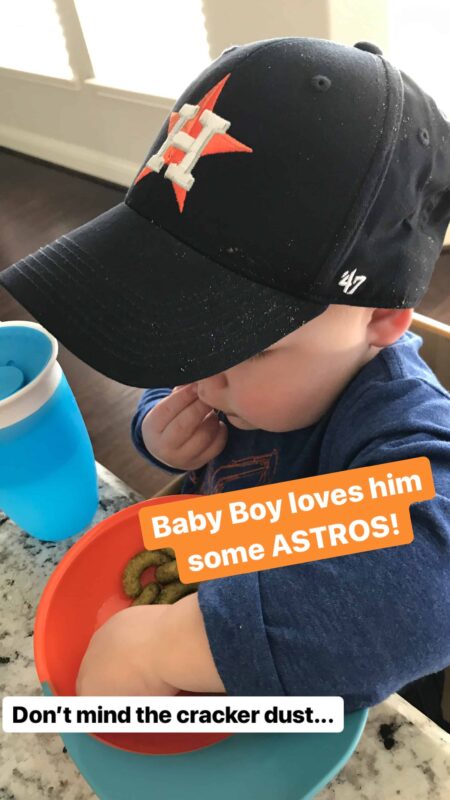 I’ve been having some fun with my new camera. I look like a tourist walking around my own home to be honest. I’m sure the neighbors have been talking…

I’m going to name this iconic photo: Troll in Hiding

I know, it’s probably not nice to call my own kid a troll. But that adorable squishiness of a nose makes me wanna sing, “Can’t Stop the Feeling”.

This photo will be named: Hiya Mama!

I got a couple of great cookbooks for my birthday, and I’ve FINALLY gotten a chance to cook from them this week. The first recipe I tried from Thug Kitchen: The Official Cookbook was Wedding Soup with White Bean Balls and Kale (apologize for the profanity if you click the link – that’s their shtick and it’s hilarious). I’ve gotta be honest: it’s health food. BUT if you can get your brain around that, this recipe was fantastic. 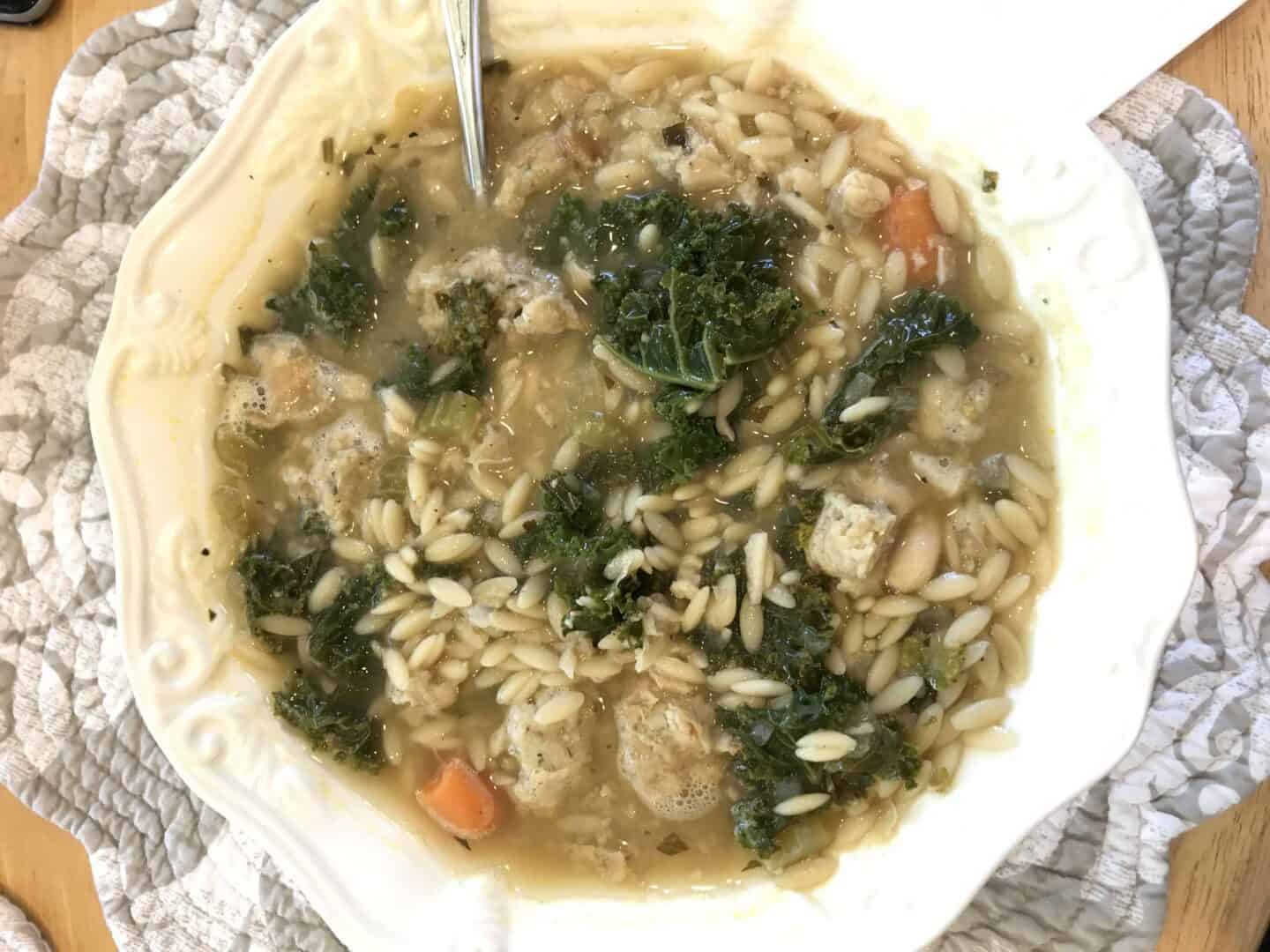 It’s perfect for a fall lunch or dinner, and it’s only 240 calories per serving and just 2g fat. I’d definitely suggest that if you’re wanting to make healthy, easy dinners that you grab this cookbook. The white bean balls (pictured below) are packed with protein and tons of flavor. Definitely cook and store the pasta + bean balls separately from the soup unless you’re eating it all at once. 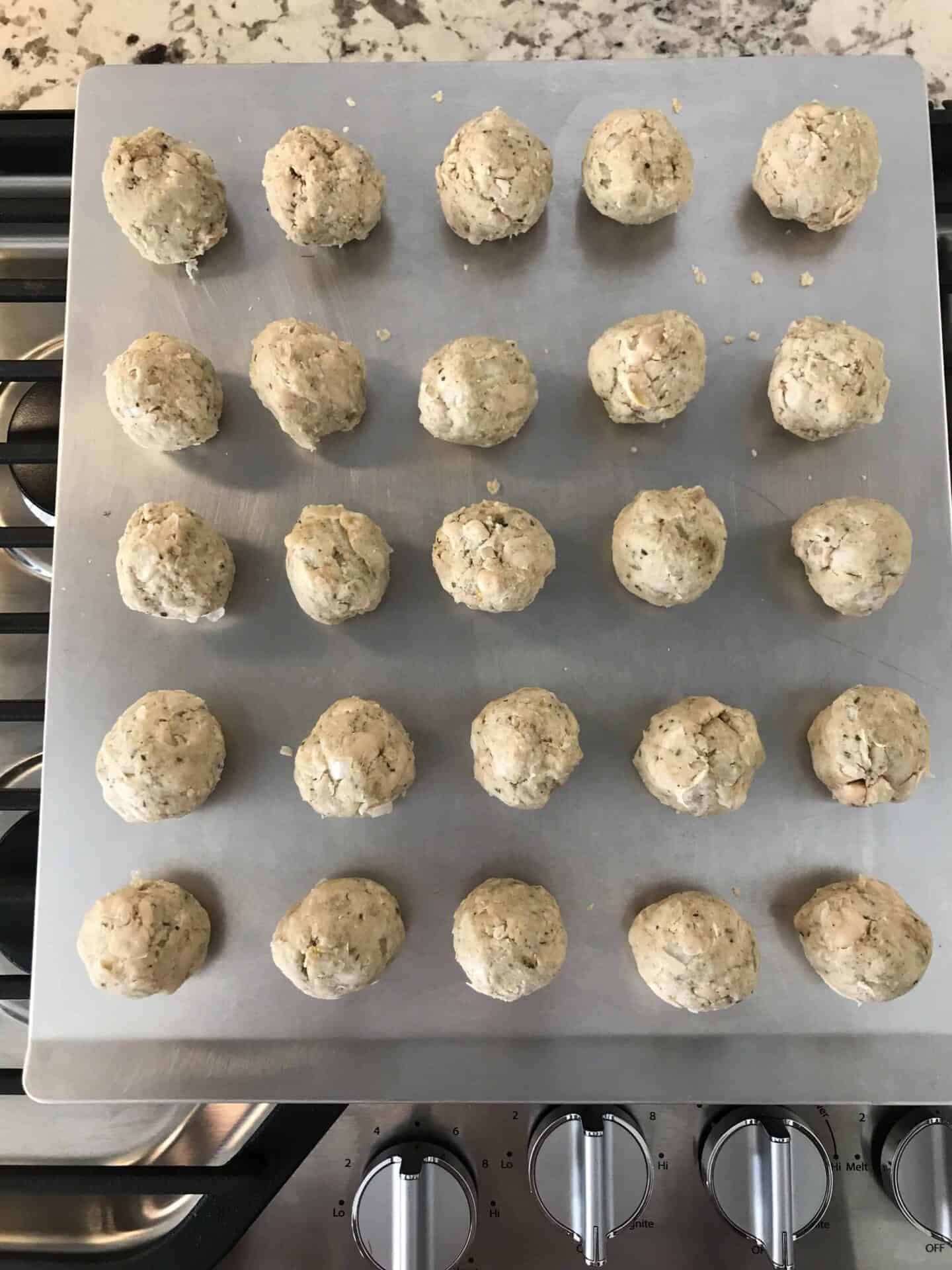 The second recipe from my new birthday cookbooks was a slow cooker recipe from Texas Slow Cooker by Cheryl Alters Jamison. I gave the Chicken Tortilla Soup a-go on Crockpot Wednesday (it’s cooking as I’m typing), so I’ll post more about that lovely yummy later.

ANNNDDD I tried a recipe from an oldie, but a goodie cookbook: Barefoot Contessa’s Back to Basics.

We had her Mustard Roasted Fish a long time ago back when we lived in Dallas, and it was phenomenal. I have no idea why it’s taken me so long to make this deliciousness again. The best part of this recipe is that it’s STUPID EASY to make – a.k.a. it’s perfect for busy weeknights.

Mix it all up.

Spread the sauce on the bottom of an oven-proof dish. Place the fish on top (skin-side down). Cover with remaining sauce. Bake uncovered at 425 for about 15 minutes. Voila. Dinner is done!

To go with the fish, I made a little roasted vegetable medley with:

It was a one-pan side dish that was so yummy and still good for us!

In a large oven-proof dish (I use a 13×9 Pyrex pan), toss some quartered Yukon Gold potatoes, 1 thinly sliced yellow onion, EVOO, and some Kosher salt and pepper. Roast at 425 for about 25 minutes.

Add some French green beans (Haricot Verts) + thin asparagus cut into 2″ pieces. Toss to combine, then roast for another 15 minutes.

Right after you pull the dish from the oven, liberally sprinkle on some freshly grated Parmesan cheese.

Like I said before, I’ve been loving my new camera. I got a little carried away the other day because the weather + lighting were just perfect.

Big C enjoyed chunking the ball across the yard, running after it, narrowly escaping certain disaster in the form of dog poop, and repeating the whole process again. It was a good time!

Our Sweet “Henny Penny” will NOT play ball if it’s any other kind of ball besides a football. Who knew? Is Air Bud still a thing?

We got to watch the first game of the World Series on our porch Tuesday night. The weather was cool and crisp (and yes, we live in Houston). Jon Boy grilled some pork chops, and we ate the leftovers of our roasted veggies (above). Of course the Astros didn’t win, but otherwise it was the perfect way to end the day. 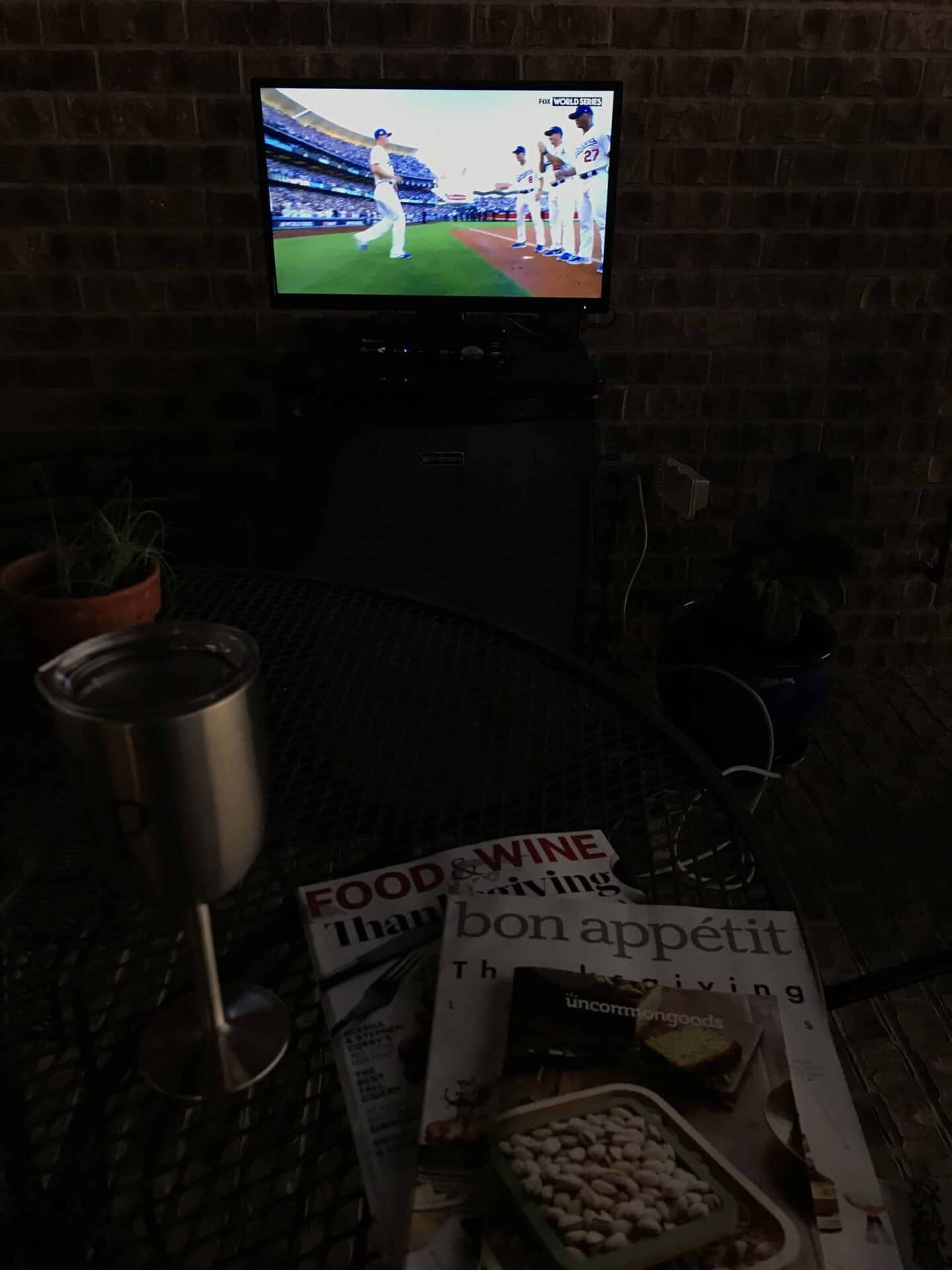 Do your neighbors BOO one another? It’s the cutest thing if you haven’t heard of it! Basically, you print off the paper below, make a bag of Halloween goodies, and leave it on your neighbor’s porch. It’s a sweet idea and a great way to build some community! It’s our second year to be BOOED, and we love it!

Ideas for the Boo Bag

Think: Dollar Tree or Target Dollar area – kids’ coloring packets, stickers, window decals, Halloween decorations, candy, cookies, candles, cocktail napkins, and you can throw it all in a cute little Halloween bag the kids can use to Trick-or-Treat. [Thanks to my fave neighbor who gave me all these ideas – muah!] 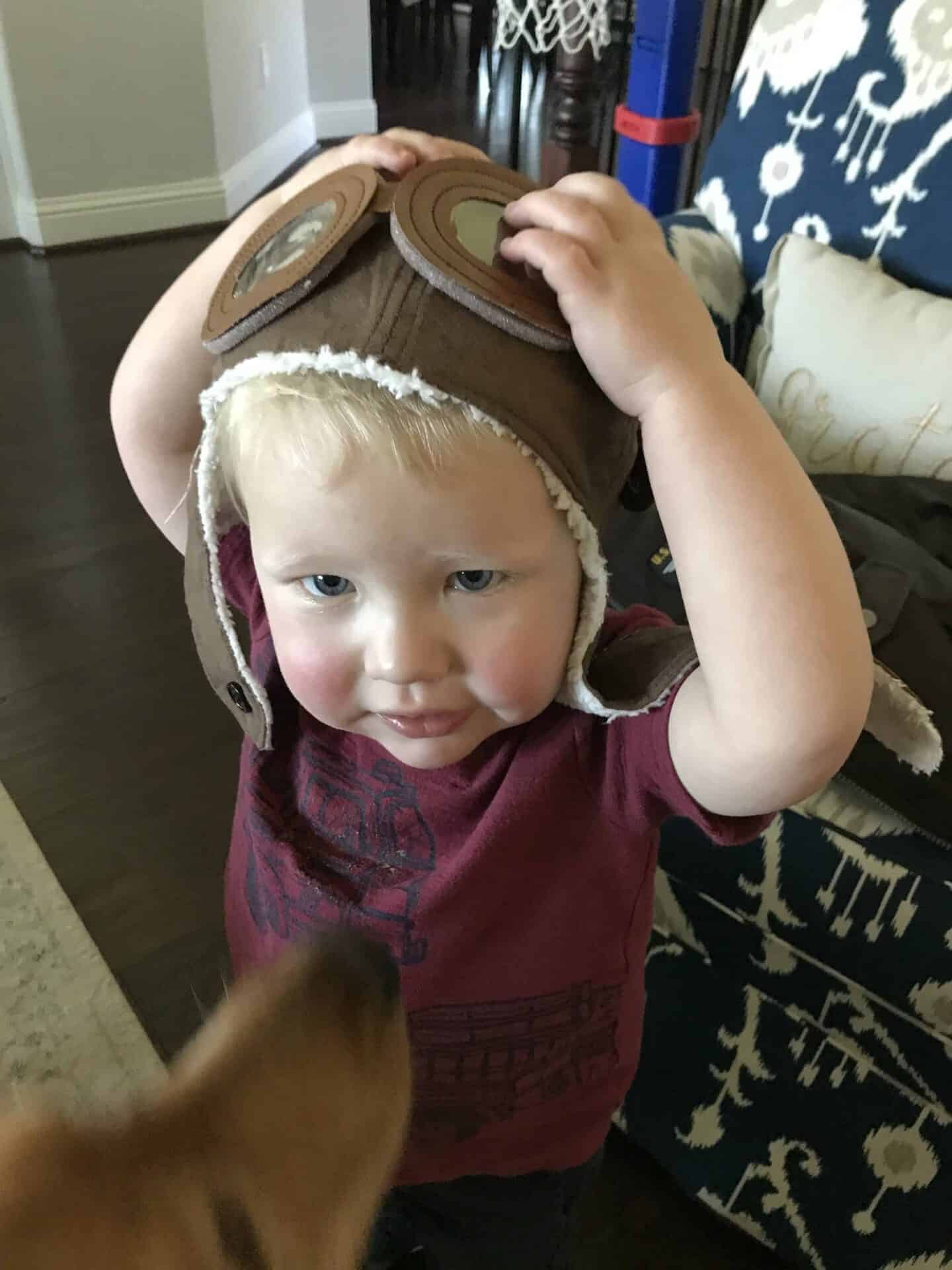 Are y’all ready for Halloween? It’ll be here in less than a week, y’all! What are you doing for the big day?