My Grandpa Starkey (my mom’s dad) was a potato farmer. So, really, potatoes are in my blood. Both times I was pregnant, I could’ve eaten potatoes like apples, skin and all! I couldn’t get enough. I think that was my body’s way of reminding me of my roots. To make sure I honor those roots, I’ve been working on perfecting these Twice Baked Potatoes. This recipe is finally worthy of this little blog, so here goes nothing!

You can cook the potatoes in one of two ways: in the air fryer or in the oven. Both work great! My preferred method is the air fryer because it’s way less to clean, they’re perfectly cooked, and I can leave the oven off in the summer. Winner, winner. This air fryer has been great for us because of the presets and the large fryer basket.

To cook the potatoes in the air fryer, spray them all over with Pam or another baking spray, and sprinkle with Kosher salt and pepper. Bake at 400 for 40 minutes (no piercing with a fork needed).

To cook the potatoes in the oven, spray them all over with Pam or another baking spray, and sprinkle with Kosher salt and pepper. Pierce each potato all over with a fork about 10 times. Bake at 450 for 45 minutes, until the potatoes are tender to the touch.

Once cooked, allow the potatoes to cool to room temperature.

I usually bake the potatoes ahead of time and let them sit at room temperature until just before assembling.

Cut the potatoes in half lengthwise.

Scoop out the cooked potato into a large bowl, reserving the skins.

Place all of the potato shells or skins in a large baking dish.

Bake at 375 for 10 minutes, until crisp. Remove from oven and set aside.

To the cooked potato, add in some cooked, chopped bacon, butter, shredded cheese, sour cream, and a pinch each of Kosher salt and black pepper. The perfect Twice Baked Potatoes filling!

Then, pour in some heavy whipping cream. Stir everything to combine with a fork.

Distribute the potato mixture evenly between the potato shells. Bake at 375 for 12 minutes, then turn the oven up to broil. Broil the potatoes for 3-5 minutes, until the tops are golden bubbly. Garnish with green onions.

I hope you can enjoy the fruits (or really vegetables) of my family’s labor! These potatoes are part of my heritage and are such a comfort food for me. I hope you love them as much as we do!

I hope you love these Twice Baked Potatoes as much as our family does! 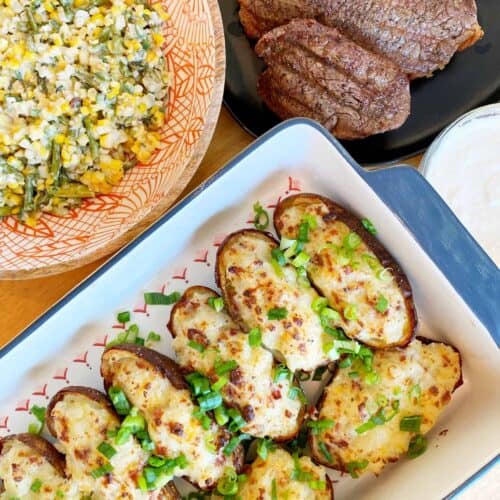 To bake the potatoes in an air fryer:

To bake the potatoes in the oven: