You’ve gotta love the incredibly versatile little bell pepper. He sure is a handy guy in the kitchen. You can stuff him with just about any kind of flavor and he just compliments it so well. 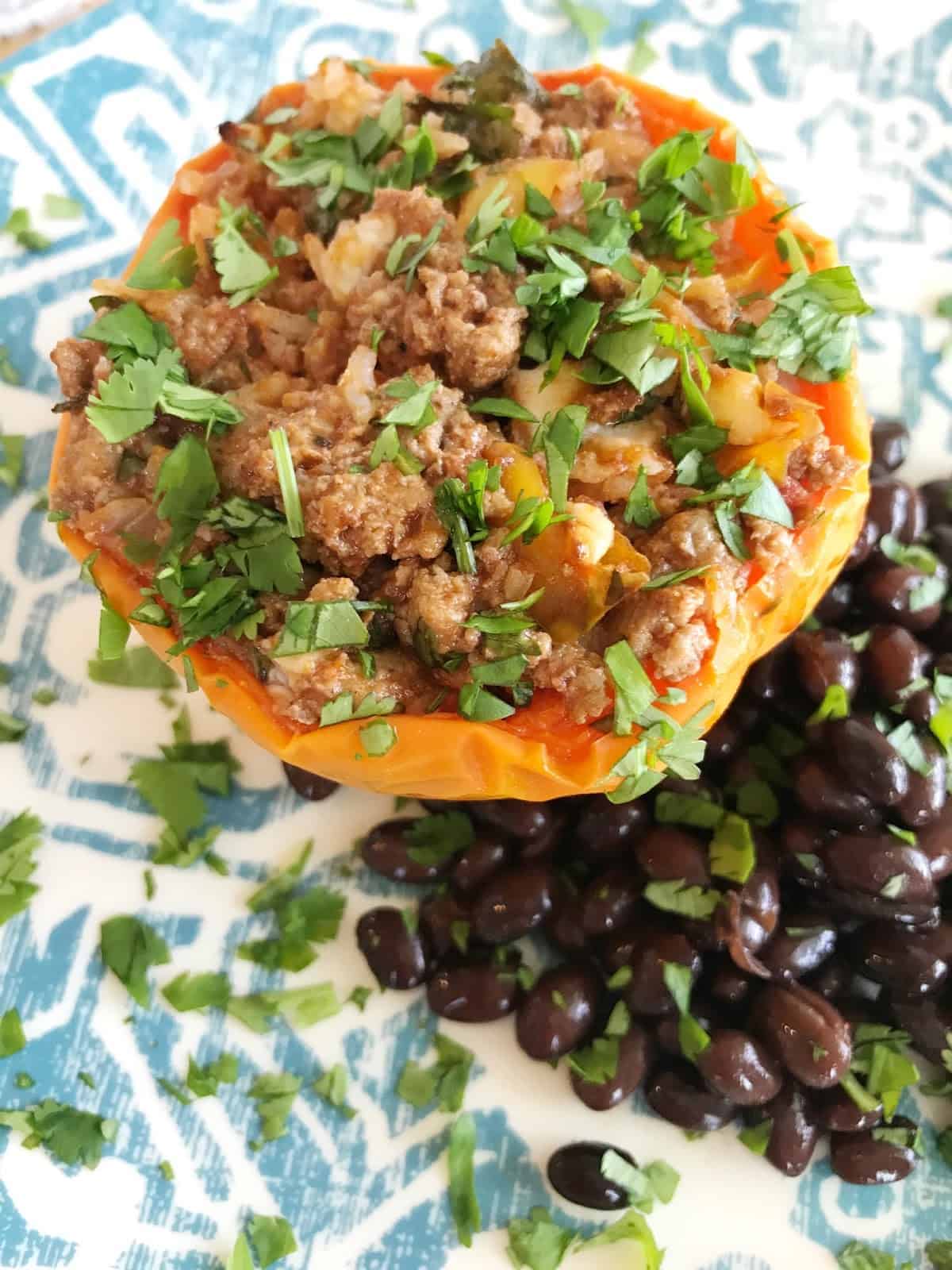 My sister-in-law gave me this recipe a while back, and we’ve both tweaked it in our own ways since then. She leaves out the rice and adds more bell diced bell pepper and beans to hers. I added the oregano, diced tomatoes, and cheese to mine. I like having the rice because it expands this into enough for 6 good sized servings [that freeze well, too if I might add]. That’s the great thing about this recipe though – you can add or subtract whatever your little heart desires. 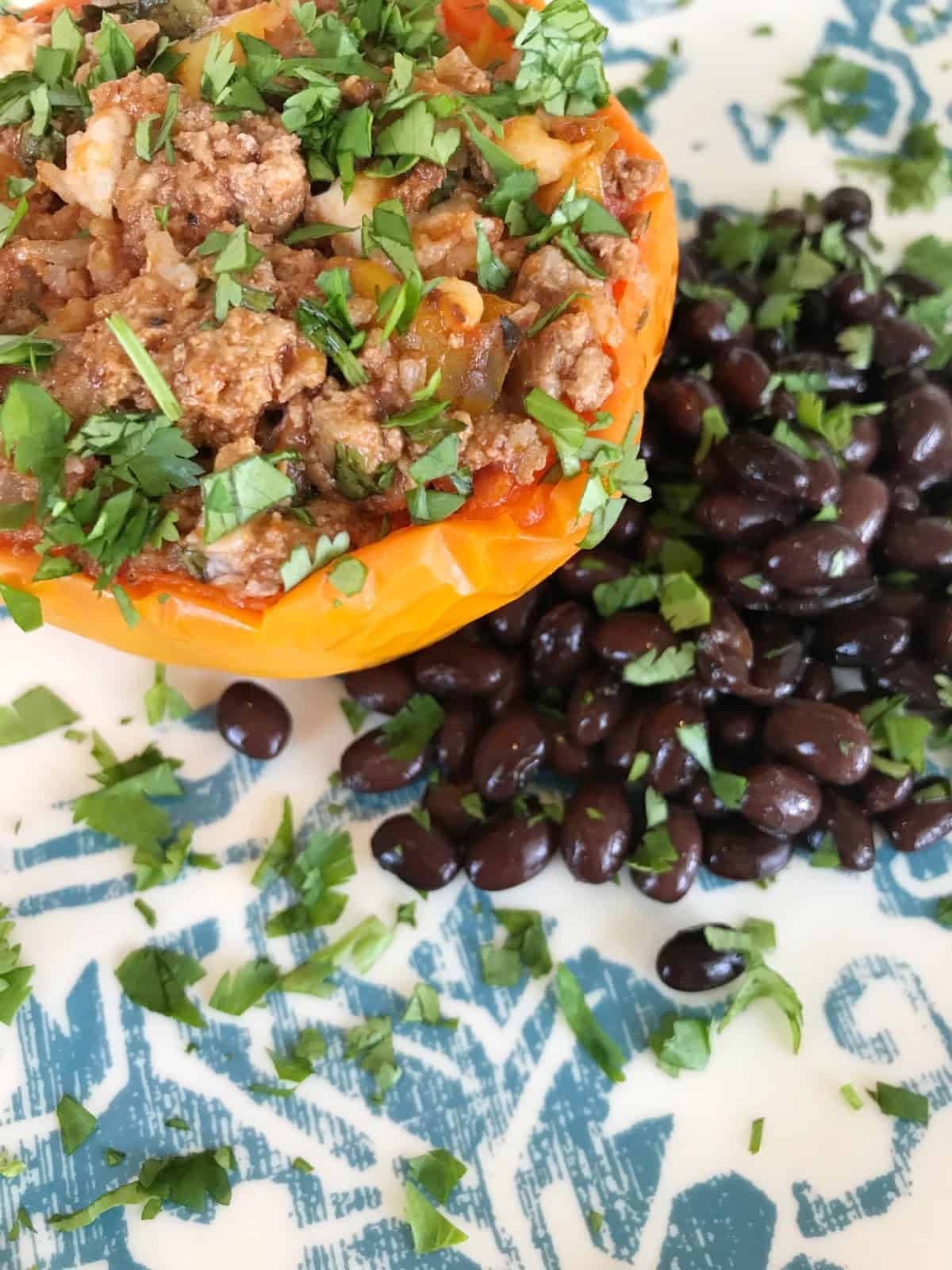 Each pepper is about 215 calories each according to this recipe, so it fits well with any good healthy meal. We served ours with some simply-seasoned black beans for a yummy and filling weeknight meal. I made three peppers for myself and Jon (one was for lunch the next day for muah). I froze the remaining 3 servings [labeled it, too, otherwise I forget what they hey it is]. 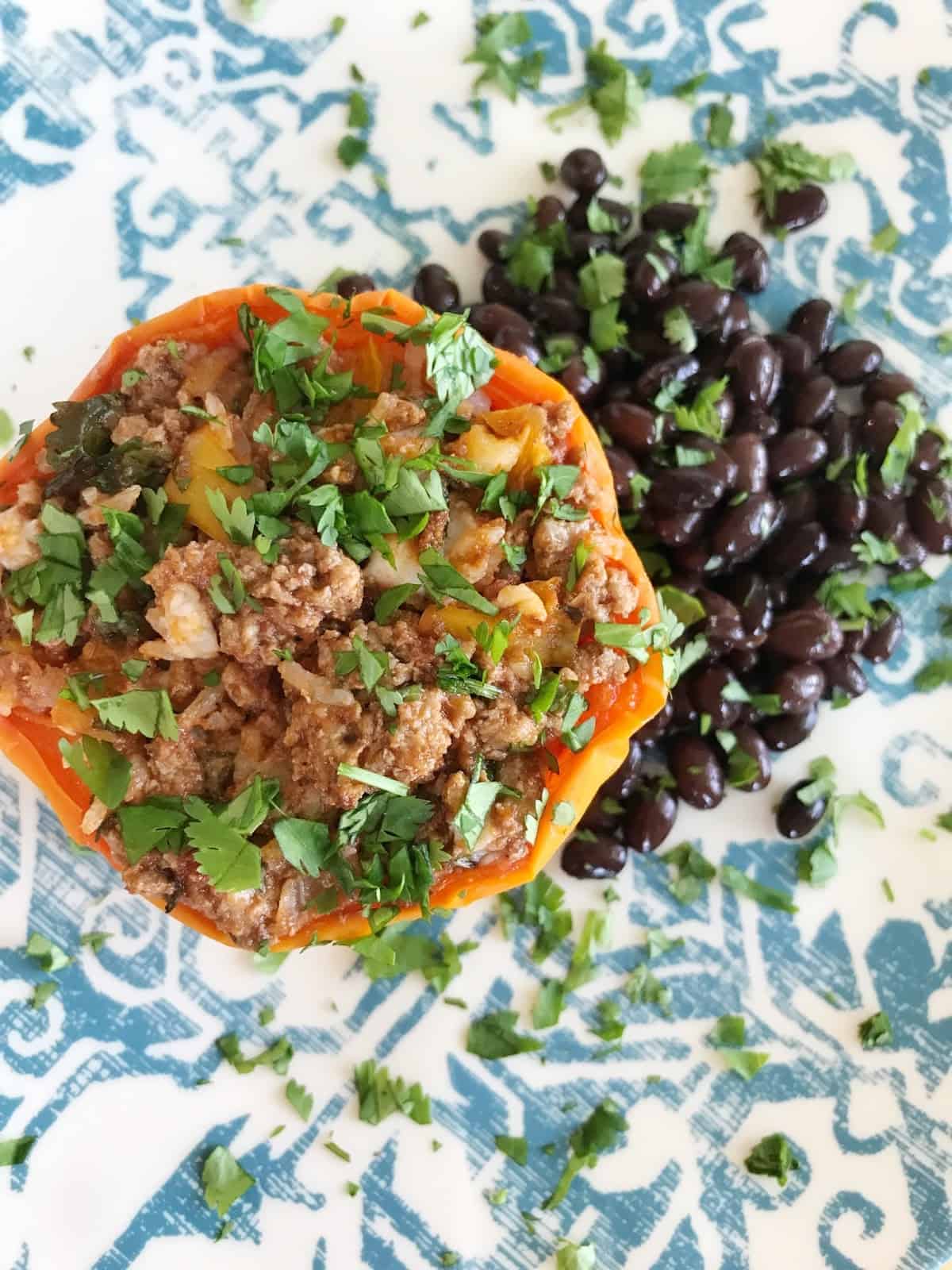 Another great win about this recipe is that you could make the filling [brown meat + add goodies] earlier in the day or even the day before. Just refrigerate until ready to stuff the peppers.
Turkey Stuffed Peppers
1 tbs. EVOO
1/2 yellow onion, diced
1 lb. ground turkey
3 garlic cloves, minced
1 tsp. cumin
1 tsp. ground oregano
Kosher salt, to taste
Freshly ground black pepper, to taste
1 8 oz. can tomato sauce
1 14 oz. can diced tomatoes, drained
1 cup cooked rice
1/4 cup cilantro leaves, chopped
1 oz. Cotija cheese, crumbled
Large bell peppers, tops, membranes, and seeds removed (save & chop the bits you can from the top)
Preheat oven to 400.
Heat the oil in a large Dutch oven or nonstick skillet over medium-high heat. Sauté the onion until translucent, stirring occasionally (about 5 minutes). Add garlic, turkey, cumin, oregano, any diced bell pepper from the tops, and S&P to taste. Stir to crumble and combine. Cook until turkey is browned and cook through, stirring occasionally (about 8 minutes). Add tomato sauce and diced tomatoes. Stir and cook an additional 5 minutes.
Remove from heat. Add rice, cilantro, and Cotija. Stir well to combine then spoon mixture into bell peppers, stuffing as full as you can without them overflowing. Place in a glass baking dish coated with cooking spray. Bake at 400 for about 25 minutes or until peppers are tender.
Garnish with cilantro.
This recipe makes enough for about 6 stuffed bell peppers. Freeze the remaining filling if you have any leftover. Just thaw in the fridge the night before serving, spoon into bell peppers, and bake as above.
Home | Recipes | dinner | Turkey Stuffed Bell Peppers