I think I’m still pinching myself after over two months of this crazy story. For those of you who may not know, our son, Corey, was in a video that went viral in August. I’m finally able to sit down and piece together everything to tell the crazy background story. Also, I think I’m ready to crawl out of my “a viral video turned me into an introvert” cave.

I have people tell me all the time how they saw the video and their friend’s cousin shared it on Facebook and it was retweeted by so-and-so and how crazy and what a small world. It’s been a surreal and fun experience! For two people who don’t like to be the center of attention, Jon Boy and I have learned to smile and enjoy the season for what it was/is. It’s absolutely insane that our sweet boy’s obsession with is favorite baseball team gained so much attention.

Our little fella sincerely loves his Astros baseball. It’s nothing we’ve ever pushed or forced or shoved down his blueberry-loving, teddy-squishing, Buzz-Lightyear-pajama-wearing throat. He just loves them. So, on a whim one night, Jon Boy and I decided to record him doing his imitation of the players’ batting stances. We’d give him an Astros player, and he’d pretend to bat just the same way that player did. He learned it all on his own just by watching the game for the few minutes he was allowed between bath and bed time. I know some folks think we’re the psycho “you’re gonna learn this kid or else” type parents, but I promise this fool is just that in love with the Astros all on his own. We get none of the credit! 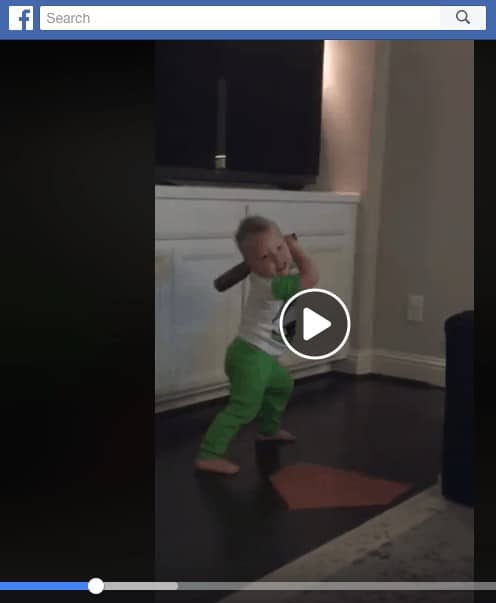 We tagged our local news station, KHOU 11, just for fun and to share something we thought was absolutely hilarious and a major show of Astros love. Oh boy howdy. Did we not see what was coming!

I shared the same video to my Twitter just for fun. Then things got really crazy. The Astros retweeted the video.

Then KHOU reached out to request an interview with our family! [I’d like to mention at this point that I was a whale of a pregnant lady. Doing a TV interview was literally the absolute last thing I wanted in my life. I wanted a fluffy pillow and Taco Bell.] 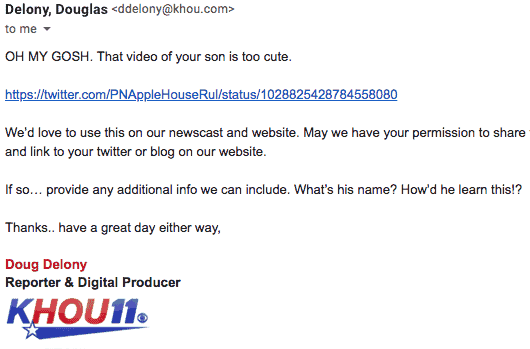 One of their reporters came out to the house and interviewed us in our natural habitat. She was wonderful with Corey and understood that he’s a two-year-old and not a monkey in a show. The original interview that aired that night on the news couldn’t be shared because there was some MLB footage in it. Something something about licensing rights, I dunno. BUT it was a great story! Here’s a shorter, online version:

We got a fun video of Corey watching the interview on TV. We only let him watch it once because we aren’t professional “my kid’s on TV” parents, and I don’t know how much is too much, ya know? He was more excited that he saw his Orbit in the interview than anything else. (Notice Orbit is propped up next to the plant on the island. Orbit used to watch him ‘run the bases’ after he’d pretend to bat.)

Jon Boy, Corey, and Corey’s Uncle Drew were all heading to the Astros’ game the night the news story first aired. Corey had no idea what was going on, and that’s the way we liked it.

Then, the Astros’ coach, AJ Hinch, saw Corey’s video and invited him to a game! We could not have even dreamed of a better thing to happen to our obsessed little man! I can’t say enough good things about this fella. What an absolutely fantastic guy to let us use his seats for a game. He took the time to reach out, offer, and organize the tickets being dropped at Will Call all during his crazy busy baseball season. And all because our crazy toddler did impressions of the players. He’s a treasure! (P.S. – Coach Hinch, our dinner invitation still stands! Home cookin’ is yours for the taking anytime you’re ready!)

Since I was about 293 months pregnant, I heartbreakingly opted to miss the game. Instead, Corey went with Jon Boy and his Nana and Grandpa! They got to sit right in Coach Hinch’s personal seats on the first base side near the dugout.

Corey even got to meet his buddy, Orbit. #LifeMade

Corey’s two faves to imitate: Evan Gattis and Tyler White. Corey said he wanted to dress as Gattis for Halloween, but the beard we bought him didn’t last longer than 30 seconds.

During the game, KHOU came out and interviewed Jon Boy and Corey again! They couldn’t have been sweeter. I have to say that KHOU handled the story in such a positive, uplifting way.

There were some folks sitting around them who recognized that Corey was “that batting stance kid”. I’m so glad my sweet boy was more enamored with his cotton candy and Cracker Jacks than all the attention.

After all, he’s just a teddy-loving little boy.

By the time Corey went to the game Coach Hinch invited him to, the video had already been aired and discussed on national news networks. It had been viewed over a million times. We were completely in awe at how crazy the whole thing had gotten.

We had a ton of folks say, “You need to reach out to The Ellen Show!” Well… they actually reached out to us, and we did a Skype interview with them. I wasn’t thrilled at the idea of Corey being on Ellen only because it would involve a lot more publicity, exposure, and a possible first-ever flight for Corey. Did I mention I was as big as a gorilla on steroids at this point? The girl who did the interview for the show was very sweet. I think she was hoping Corey would ‘perform’ his batting stances for her, but our kid isn’t a monkey as I’ve said. He was pouty and whiney and wanted a snack (he’s two, ya feel me?) So, in the end, the interview didn’t lead to anything but we’re okay with it. It was a fun experience, but we were ready for things to settle back to normal.

We’re grateful that we got to share the innocent joy our boy has when it comes to Astros baseball. We’re happy he brought smiles and laughs to so many people. In the end, all we wanted was to spread a little positivity through our crazy kid and his obsession with his favorite team.