Chicken Sauce Piquant is a traditional New Orleans dish that’s full of peppers, tomatoes, spices, and herbs. It’s perfect spooned over steamed rice alongside your favorite hot sauce (Tabasco is king in our house). You can even cook this in either a pot on the stove or transfer it to your slow cooker! I have to say that Creole food is my all-time favorite cuisine. Give me heat, spice, and a smack of flavor any day.

The seasoning of this recipe are out of this world! Okay, really, they’re in this world in a fantastic city called New Orleans (properly pronounced “Nawlins”). The seasonings are: Kosher salt, freshly ground black pepper, white pepper, cayenne pepper, chile powder, and paprika. The white pepper can be found at any ole grocery store. You can also order it online if you’re not wanting to search the spice aisle. Trust me, once you make this Chicken Sauce Piquant, you’re gonna want to have those seasonings on hand!

Mix the spices together, then throw in some chicken breast that’s cut into bite-sized pieces and toss it all together.

Next, dredge the chicken in flour, working in batches.

Brown the chicken on both sides, being careful to not overcrowd the pan. You don’t have to cook it all the way because you’ll simmer it in the sauce later.

Once the chicken is browned, remove it to a plate for later.

Now is the time for confession: I totally goofed and DID NOT take a picture of myself making the roux. SO LISTEN UP, PEOPLE! Time for a little reading, here. Just whisk the remaining flour into the oil left in the pan. Cook over medium heat until the roux turns into a light brown, peanut butter color. Whisk occasionally so it doesn’t burn. Okay, whew! There we go! All done. Moving on!

Make sure to chop your veggies while the chicken is browning. You’ll need some onion, celery, and poblano pepper. Mince or press a few cloves of garlic, too, but those will go in later.

Once your roux is peanut butter colored, toss in the onion, celery, and poblano. Sauté them until they’re softened.

Then, throw in yer garlic for about a minute.

Now, we add about 5 Roma tomatoes (pronounced tomaters in our house). Just remove any white membranes from them and give them a rough chop.

With the Roma tomatoes, you’ll add in your cooked chicken, a can of petite diced tomatoes, chicken stock, dried thyme, and bay leaves.

Now, give it all a stir, cover, and cook over low heat until the gravy is thickened and the chicken is cooked (about 45 minutes). Make sure to scrape the bottom with a wooden spoon to get up all the yummy flavor at the bottom (the fancy word for that is fond).

Throw a big spoonful on top of some steamed rice, garnish with scallions, and serve with your favorite hot sauce. Tabasco will always be king in our house. When he was alive, my brother and I had a SERIOUS family feud about which hot sauce was best. He liked Louisiana hot sauce best. He was right about a lot of things, but not that one.

Enjoy this hearty Chicken Piquante dish that embodies the flavors of New Orleans! The leftovers freeze VERY well, too, so nothing will go to waste. 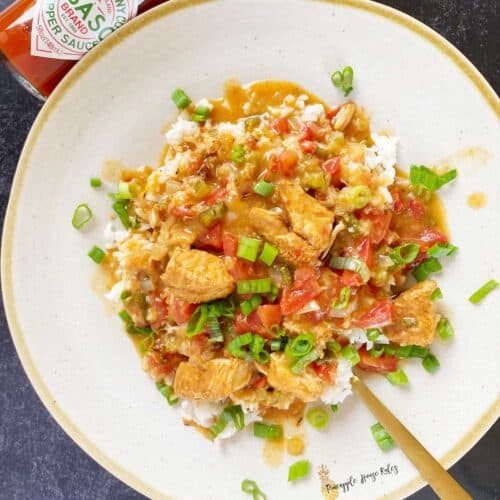 *If you’re using a slow cooker, now would be the time to transfer the mixture from the stove. Then, add in the chicken, tomatoes, stock, thyme, and bay leaves as mentioned. Cook on low for 2 hours, then set to Warm until you’re ready to eat.