Skip to content
We found this little lovely in Bon Appetit magazine a few years back when we were planning Thanksgiving. She’s never disappointed us.
I just made the recipe again for a fantastic Friendsgiving our good buddies put on. The best thing about bringing this dessert is that it’s perfect at room temperature! I definitely forgot to take pics of the cooked pie, but you get the idea of the deliciousness from the before picture: 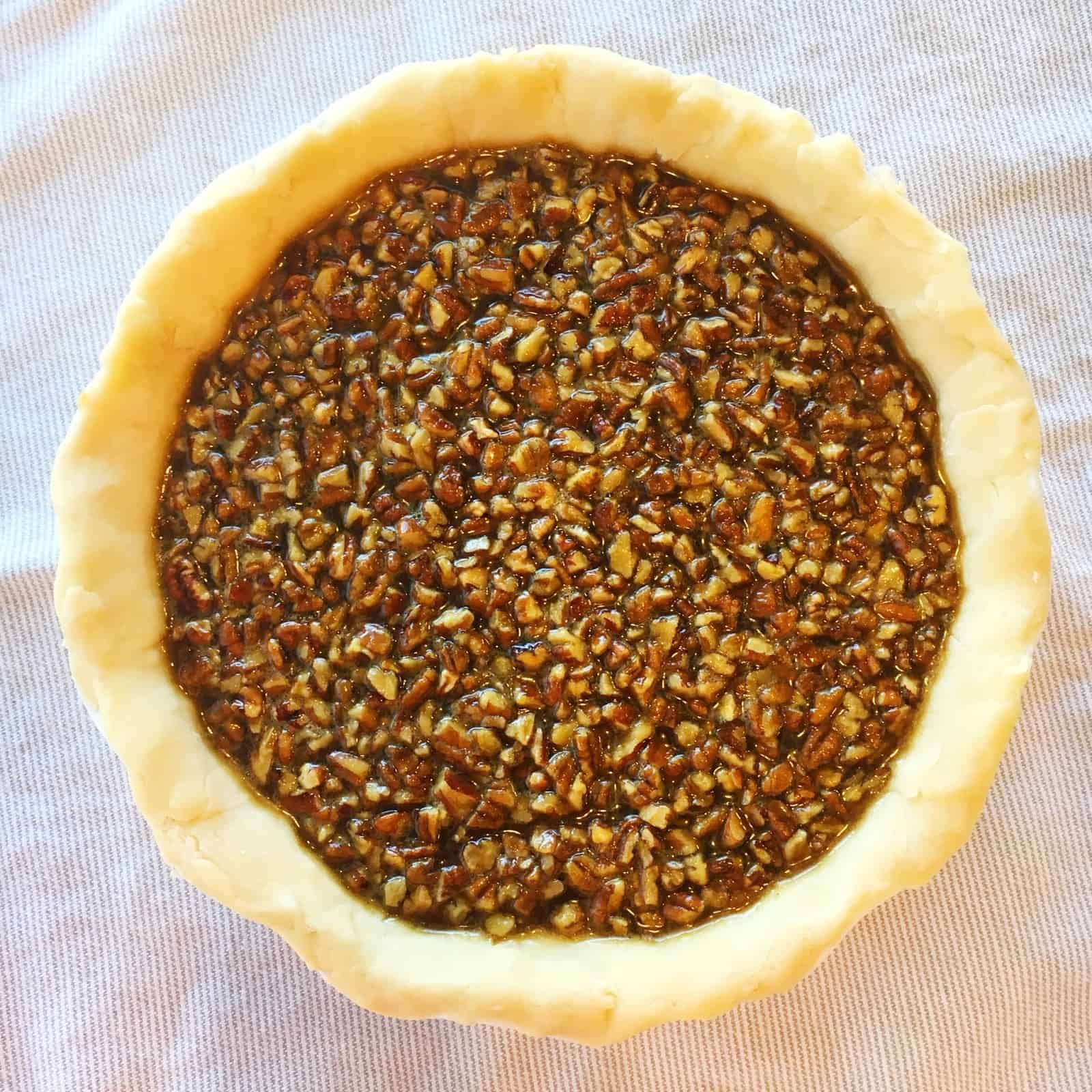 I’ve made a few [minor] changes to the recipe, but one thing stays the same: bourbon + sugar = Fall Food Fantasy! 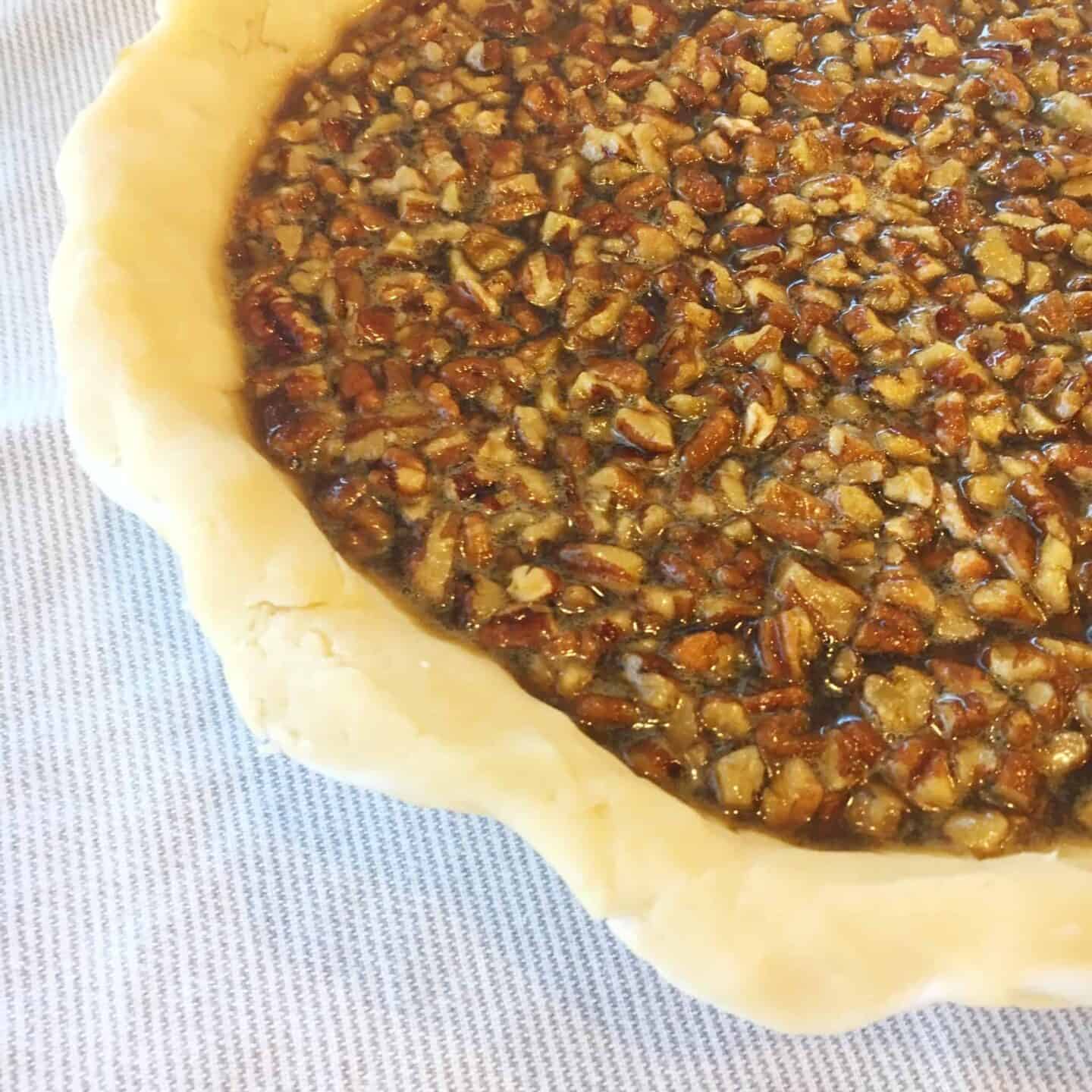 The great and best thing about this recipe is that you can throw everything into a Kitchenaid mixer or a biggo bowl and just whip away! It comes together beautifully and the cooking technique is perfect. Easy peazy.
Bourbon and Brown Butter Pecan Pie
Crust
1½ cups all-purpose flour, plus more for rolling
½ teaspoon Morton salt
¾ cup unsalted butter, room temperature, cut into 1/2” cubes
Assembly
½ cup (1 stick) unsalted butter, room temperature
1 cup packed light brown sugar
½ cup honey
½ cup pure cane syrup (such as Steen’s) or dark corn syrup
2 tbs. bourbon
2 tbs. vanilla extract
Pinch of ground nutmeg
Pinch of ground cinnamon
3 large eggs
2 cups pecans, chopped
Crust
Sift 1½ cups flour and salt in a medium bowl. Using your fingertips, work in butter until mixture is crumbly. Mix in 2 tbsp. cold water and knead until dough just comes together.
Roll out dough on a lightly floured surface until about ¼” thick. Fold in half, then in half again (so that it’s folded into quarters); roll out to a 12” round. Transfer to a 9” pie dish. Press the crust into the pie dish so that all the sides are covered with dough (wouldn’t want to waste a good thing, right?) Prick the bottom of the dish all over with a fork to allow for even cooking. Throw into the freezer while you make the filling.
Assembly
Place a rack in lower third of oven; preheat oven to 425°. Cook butter in a small saucepan over medium heat, stirring often, until it foams, then browns, 5–8 minutes. Transfer to a large bowl or mixing bowl of a standing mixer. While still warm but not hot, whisk in brown sugar, honey, cane syrup, bourbon, vanilla, nutmeg, and cinnamon until smooth. Add eggs, one at a time, mixing well to combine. Gently mix in the pecans. Scrape filling into pie crust.
Bake pie 10 minutes. Reduce oven temperature to 375° and continue to bake until crust is golden brown and filling jiggles only slightly in the center, about 50 minutes. Transfer to a wire rack; let cool. Chill until firm, at least 4 hours. Remove from fridge at least 1 hour before serving.
Do Ahead: Pie can be made 3 days ahead. Cover and keep chilled.