If you’re like me, finding a healthy-ish, make-ahead, simple breakfast that doesn’t taste like raw sewage is a pretty daunting task. You can keep your kale and egg white smoothie, pal. I want me some bacon! This frittata (and I pronounce it in my head with a British accent, “Frie-tah-tahhh”) is so yummy that you won’t even realize it’s low carb + gluten free! There’s even some green stuff in there, too. AND this fella keeps well in the fridge for a few days (that’s why it’s a make-ahead, yo).

I know I told y’all a while back that ole Jon Boy has gone on the keto (ish) diet. He’s really had a lot of success with it, so I’m going on an even less keto (ish) diet with him. Really, we’re just trying to eat fewer carbs. He’s substituting more fat whereas I’m just trying to cut the carbs and up the protein. Wine is a protein, right?

Slice your tomatoes and sprinkle a little salt on them. Let them sit for about 15 minutes so they dry up just a tad. This  way, you won’t have as much moisture coming out of them as they bake.

Meanwhile, roast yer bacon. We love cooking bacon like this because the fat just drips to the bottom, you get rid of the fat like this, and you’re left with perfectly crisp King of the World Bacon. We roast it on these racks on a baking sheet at 400 for about 22 minutes. And yes, a whole package of bacon. Mama don’t play.

As the bacon cooks + then cools, whip up your egg mixture:

I used a trusty 9×13 Pyrex dish, but you really can use any oven-proof dish you’d like. The baking time will probably change based on what you use. If you use a smaller pie dish, the time might be less, so be sure to occasionally give your dish a ‘jiggle’ to see if the center has set.

Chop up your bacon and mix it in.

Bake at 350 for 50 minutes to 1 hour. Again, just make sure the center is ‘set’ by giving the dish a jiggle after about 45 minutes of cook time. Let the frittata (again, with the accent: “Frie-tah-tah”) cool for at least 10 minutes before cutting into it.

Garnish it with some parsley or basil or maybe even some goat cheese (mmhmmm) or just slice ‘er up and chow down because your two year old wants to watch “Paw-ka-troll” and the newborn needs her 302nd bottle or the day. Ya know, whateves. You do you. 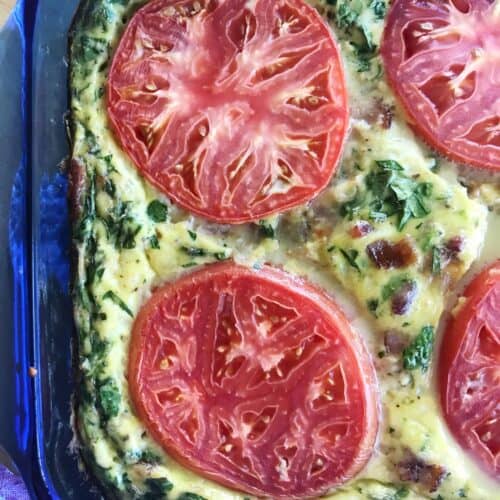 I hope you and yours enjoy this BERTS Frittata Breakfast as much as we do!